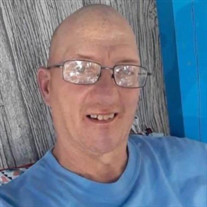 Terry “Piggy” Epley, age 47, of Henderson, KY, passed away at 4:47 p.m., Saturday, May 7, 2022, at Deaconess Midtown in Evansville, IN surrounded by the love of his family. Terry was a truck driver for 23 years. He loved being outdoors, hosting karaoke parties, playing cornhole, and watching basketball. More than anything, he loved his kids. Terry was a very caring man and a loyal friend. He was a devoted husband and wonderful father. Terry was preceded in death by his mother Martine Sebree, biological father Terry Epley, Sr., sister Deborah Burden, brother Steven Epley, and niece Nicole Rosholt. Terry is survived by his wife Ellen Epley; daughter Zoey Epley of Madisonville, KY; sons: Terry Jordan Epley of Owensboro, KY, Zachary Epley of Madisonville, KY, Matthew Epley of Owensboro, KY; biological mother Sharon K. Epley of Henderson, KY; father Bill Sebree of Owensboro, KY; sister Elaine Epley of Evansville, IN; niece (whom he considered a sister) Patricia Phelps of Owensboro, KY; one grandchild on the way; many nieces & nephews, cousins, great nieces & nephews, and too many friends to count. Terry’s life will be celebrated by his family and friends privately. If you would like to support the family, you are invited to make memorial contributions to Ellen Epley c/o 629 S. Green Street, Henderson, KY 42420. Arrangements entrusted to Benton-Glunt & Tapp Funeral Home, A Life Celebration® Home, online condolences may be made at www.bentongluntandtappfuneralhome.com.

The family of Terry "Piggy" Epley created this Life Tributes page to make it easy to share your memories.

Send flowers to the Epley family.