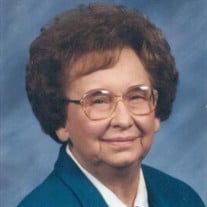 June Elaine Hatfield, 100, of Henderson, Kentucky, passed away Monday, September 28, 2020, at her home surrounded by loved ones. June was a member of the Uniontown Methodist Church where she played the piano. After returning to Henderson,... View Obituary & Service Information

The family of June Elaine Hatfield created this Life Tributes page to make it easy to share your memories.

Send flowers to the Hatfield family.