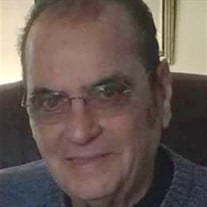 Jackie Earl Williams, 78, of Henderson, KY passed onto Heaven at 10:08 p.m. Saturday, April 20, 2019 at the Lucy Smith King Care Center. He was born February 20, 1941 and was a member of Trinity Lutheran Church. After retiring from Peabody Coal, he served as Henderson County Constable in District 5 for nearly 30 years. Over his lifetime, he enjoyed many interesting things such as serving in the Army, riding motorcycles, collecting guns, doing security work at Starlite Drive- in, Ellis Park, and Markham Security, taxidermy, deer hunting, learning to fly, serving as a special deputy with the Sheriff's department, being a member of Rolling Thunder, the Masonic Lodge and Shrine. Most of all, he enjoyed time with his family and friends. He was preceded in death by his parents, Carl and Bessie Williams, his wife of 51 years, Shirley Williams, and his daughter, Jackelyn Pruitt. Survivors include one daughter, Deanna Meeks and her husband, Daniel of Henderson; two sisters, Barbara Croxton of Madisonville and Suzy Hutslar of Indianapolis; two brothers, Jimmy Williams and Johnny Williams both of Henderson; and three grandchildren, Daniela Meeks, Christian Pruitt, and Grace Ann Pruitt, all of Henderson; his companion, Betty Cordray, also of Henderson, nieces, nephews, and many, many friends. Relatives and friend are invited to Jackie’s Life Celebration from 5:00 until 8:00 p.m. on Thursday and again on Friday from 9:00 a.m. until the service time at Benton-Glunt Funeral Home. A memorial service will be held on Friday, April 26, 2019 at 10:00 a.m. at the funeral home. Expressions of sympathy may take the form of contributions to the Lucy Smith King Care Center/St. Anthony’s Hospice, 2410 S. Green St., Henderson, KY 42420. Arrangements entrusted to Benton-Glunt Funeral Home, A Life Celebration® Home, online condolences may be made at www.bentonglunt.com

Jackie Earl Williams, 78, of Henderson, KY passed onto Heaven at 10:08 p.m. Saturday, April 20, 2019 at the Lucy Smith King Care Center. He was born February 20, 1941 and was a member of Trinity Lutheran Church. After retiring from Peabody... View Obituary & Service Information

The family of Jackie Earl Williams created this Life Tributes page to make it easy to share your memories.

Send flowers to the Williams family.