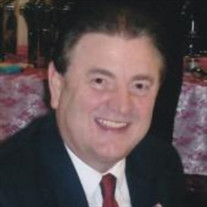 Cyril Thorton Coots Jr., 71, of Robards, Ky passed away on Tuesday, September 22, 2020. Cyril was a faithful member of the Church of Jesus Christ of Latter-Day Saints, where he diligently served in many leadership capacities. He was a servant of the Lord, who always put others needs before his own. Cyril was known to always have a smile on his face and could put a smile on anyone around him. Cyril retired from Dana Corporation after 39 years of service. For the last 9 years, he worked for Henderson County Schools as a bus driver. In the last year, he drove a preschool route, where he grew to love his “littles.” He was preceded in death by his parents, Cyril Sr. & Rosetta Coots, along with three brothers, Wayne, JT, Alvin, and his sister Dorothy. He is survived by his wife of 48 years, Mary; children, Sabrina Murphy (Doug) of Richland, Missouri, Jason Coots (Lisa) of Henderson, Ky, Melissa Evans (Jeff) of Henderson, Ky, and Craig Coots (Jenny) of Chandler, Indiana; 18 grandchildren, Meagan Warren (Bart), Clint Reid, Brendan Mills, Brandon Siggers, Quinten Goodridge Jr., Caitlin Lewis, Baillie Beard (Jacob), Garrett Reid, Elam Coots, Emma Evans, Aubriella Coots, Kassi Evans, Marietta Coots, Sariah Coots, Lyana Coots, Serenity Coots, Kingston Coots, and Ava Coots; four great-grandchildren, Violet Warren, Elaine Warren, Isabella Stewart-Valentine, and CeCe Beard; three brothers, four sisters and a long list of extended family. Funeral service is private due to COVID-19 restrictions. President Brice Anderson will officiate. Tomblinson Funeral Home, Henderson Chapel is entrusted with arrangements. Burial will follow at Roselawn Memorial Gardens. Visitation will be from 4-8 p.m. on Thursday, September 24 and from 9-10:30 a.m. on Friday, September 25, both at the funeral home

Cyril Thorton Coots Jr., 71, of Robards, Ky passed away on Tuesday, September 22, 2020. Cyril was a faithful member of the Church of Jesus Christ of Latter-Day Saints, where he diligently served in many leadership capacities. He was a servant... View Obituary & Service Information

The family of Cyril Thorton Coots Jr created this Life Tributes page to make it easy to share your memories.

Send flowers to the Coots family.