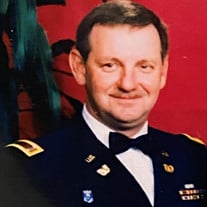 CW4 John A. Womack, age 74, was born in Henderson, KY on October 9, 1947 and passed away on March 29, 2022 at Murray Calloway County Hospital in Murray, KY. John proudly served his country in the United States Army for 28 years. He served from 1990-1991 in Operation Desert Storm Gulf War. Locally John worked for the Henderson County Rescue Squad as Chief and was a Special Deputy for the Henderson City Police Department. He loved to fish, hunt, play golf, and go boating. John and his wife enjoyed spending their winters in Bradenton, FL with their Florida family and friends. He was preceded in death by his son Anthony D. Womack, grandson John Michael Womack, and his parents Reverend Mr. and Mrs. Virgil Womack. John is survived by his wife of 55 years Paula Womack, grandson Bradley Womack, and granddaughter Kylie. He is also survived by his great-grandchildren Anastasia and Michael Anthony Womack, as well as his lifetime buddy for 10 years and support dog “Cody”. Relatives and friends are invited to John’s Life Celebration from 4:00 until 8:00 p.m. on Friday and again on Saturday starting at 10:00 a.m. until the service time at Benton-Glunt & Tapp Funeral Home. The funeral service will be held at 1:00 p.m. on Saturday, April 2, 2022 at the funeral home with Reverend Keith Griffin officiating. Burial will follow at Roselawn Memorial Gardens in Henderson, KY. Military honors will be rendered by the American Legion Worsham Post #40. Pallbearers will be: Logan Johnson, Kevin O’Nan, Tristin Dixon, Dakota Gentry, Ethon Whitfield, and Mitchell Hutcheison. Honorary pallbearers will be Jerry Veach and Ethan Dixon. Arrangements entrusted to Benton-Glunt & Tapp Funeral Home, A Life Celebration® Home, online condolences may be made at www.bentongluntandtappfuneralhome.com.

CW4 John A. Womack, age 74, was born in Henderson, KY on October 9, 1947 and passed away on March 29, 2022 at Murray Calloway County Hospital in Murray, KY. John proudly served his country in the United States Army for 28 years. He served... View Obituary & Service Information

The family of CW4 John A. Womack created this Life Tributes page to make it easy to share your memories.

Send flowers to the Womack family.